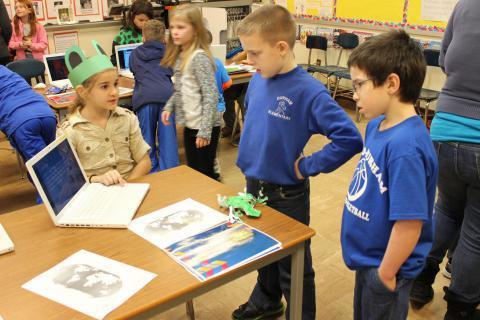 We are pleased to announce that the Cairo-Durham Central School District was awarded the status of a Google for Education Reference District. After completing an invitation-only application process, CDCSD joins about 150 school districts nationwide—and only eight districts in New York State—in receiving this status.

Google for Education Reference Districts are districts that demonstrate excellence and thought leadership through the innovative use of technology, including G Suite for Education (formerly known as Google Apps for Education) and Chromebook laptops, to drive impact and positive learning outcomes. This badge allows CDCSD to be recognized by peers as a leader in educational innovation.

CDCSD has been at the forefront in leveraging available technology since introducing Gmail to the district in 2009, as well as hundreds of Chromebook laptops when they first became commercially available in 2013. Since then, the list of Google apps and features has grown.

Moving forward, the district plans on continuing the expansion of Chromebooks across all grade levels. CDCSD’s new “Connected Classroom” initiative aims to cultivate 21st century skills by providing all middle/high school students with their own Chromebook laptops to use throughout the year. The program began this fall with incoming ninth graders and will expand to all seventh and tenth graders later this school year. The plan is to have a completed 1:1 digital learning environment in Grades 7-12 within the next few years. Additionally, new Chromebook devices are being implemented in classrooms at the elementary level to develop the skills of K-5 students.

“We didn't set out to use Google's products or get awards. We set out to make it easier for students and staff to do their work,” said Mr. Kikpole. “We were trying to solve real problems and deliver the kinds of service that people needed. It just so happened that Google made this easy and affordable for us to do.”