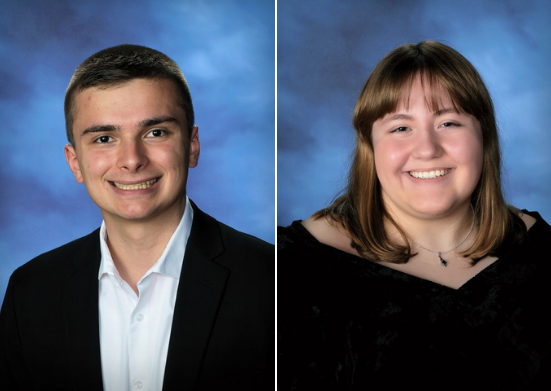 Class of 2021 Valedictorian and Salutatorian

Mr. Jeremy Moore, Principal of Cairo-Durham High School, is pleased to announce that Drew Sirago has achieved Valedictorian and Amber Powell has achieved Salutatorian for the Class of 2021.

Drew Sirago (pictured, left) is the Valedictorian of the Cairo-Durham Class of 2021. Drew has been a member of National Honor Society since 11th grade, serving as Vice President his senior year. He is also a student representative for Student Council and a member of Students Against Destructive Decisions (SADD). He played on the Varsity Tennis team all four years of high school and was named a First Team Patroon Conference All-Star his sophomore year. Drew received multiple awards for Outstanding Academic Achievement in AP, College and Honors courses throughout high school. For his academic achievements, he received the Gellert Cornell Admissions Invitation and the Bausch and Lomb Honorary Science Award. Drew also received the National AP Scholar Award, which is granted to students who receive an average score of 4 or more on all AP Exams taken and a score of at least 4 on eight of these exams. Drew has been actively involved in the school’s music program and was selected for All-County and Area All-State for voice and percussion on multiple occasions. In his junior year, he was selected as an Alternate for All-State for both percussion and voice. In his senior year, Drew was selected for, and participated in, NYSSMA’s All-State Mixed Chorus and the National Association for Music Education’s All-Eastern Mixed Choir. Drew has played percussion for Empire State Youth Orchestras (ESYO), a prestigious group of young musicians across the Capital Region, since 6th grade. He played in ESYO’s Wind Orchestra in 6th and 10th grade and has been selected for their top percussion ensemble since 7th grade. In his spare time, Drew enjoys reading (especially political literature), playing video games and spending time outdoors. In the fall, Drew will attend Cornell University, where he plans on majoring in political science and minoring in music.

Amber Powell (pictured, right) is the Salutatorian for the Cairo-Durham High School graduating class of 2021. Throughout her four years in high school, she was a member of National Honor Society, the class secretary, participated in soccer and softball, and played alto saxophone in jazz band, concert band, and marching band. She also attended All-County and did NYSSMA for almost all four years of high school. Throughout high school, Amber received multiple awards for Outstanding Academic Achievement and Exemplary Performance in all of the AP and college classes she has taken. Amber was also named an AP Scholar with Distinction and received the Clarkson Leadership Award and the Cornell University Invitational Award during her junior year. Amber maintained high honor roll for all four years of high school. During her senior year, Amber was selected to participate in the New Visions Scientific Research and World Health program at SUNY’s Cancer Research campus. Through this program, Amber wrote two 30-page research papers about post-cancer pain and phantom limb pain in mastectomy patients. In her spare time, she enjoys reading, playing with her dog Harvey, and baking. In the fall, she will be attending Worcester Polytechnic Institute, majoring in biology and biotechnology. In the future, she plans to obtain her Ph.D. in cellular and molecular biology and would like to continue her research in cancer pain.